Purdue University has offered tuition insurance to its students and families for the past three years. Before that, the Big Ten school in West Lafayette, Indiana experienced many concerns seen at colleges and universities across the country. School administration found themselves bogged down by the volume of appeals for withdrawals, many that were due to a spike in mental health claims.

Even before the pandemic, mental health-related withdrawals were growing at Purdue, according to Tim Riley, the university's bursar.

He said the administration would get bogged down with as many as 40 appeals each term. Not every appeal would get approved by the committee made up of representatives from various departments including financial aid and housing, but Purdue would work with some students so they could hopefully return to school when they were well. Since partnering with GradGuard to offer its students and families tuition protection, things have changed. Riley says Purdue sees about 10 appeals per term, which are typically extreme cases such as accidents or the death of a parent.

GradGuard vs. the Competition: The Clear Differences

Before partnering with GradGuard in Dec. 2018, Riley looked into other options for college tuition insurance. But what he found was other companies had opt-out programs, which he says he didn't like.

"That's basically putting a fee on the account and then hoping people don't find out about it," Riley said, as he referred to the automatic tuition insurance fee that is added to student accounts with schools who work with another provider.

"That's not the route we wanted to go. We wanted this option out there for students who truly needed it, especially for students who are out of state, or international parents where a lot of dollars are coming in -- not only for tuition but living expenses," Riley said.

It was clear GradGuard was different with its opt-in program and its partnership with Allianz Global Assistance, the largest travel insurance provider in the world. Riley said that provided the credibility and price-point effectiveness he was looking for.

Given the major disruptions the Coronavirus had on higher education, GradGuard worked with Allianz Global Assistance to come up with some sort of accommodation. Pandemics are typically excluded from coverages, but in June 2020, GradGuard announced claims related to Covid-19 illnesses were going to be accommodated, until further notice. In February 2022, GradGuard announced an addition of an Epidemic Coverage Endorsement to new tuition insurance plans.

The fact that GradGuard can protect against withdrawals due to Covid-19 illnesses was another factor that set GradGuard apart from the rest, according to Riley.

Seeing the Benefits of Displaying Your School's Refund Policy

With billing provider integration, Purdue is able to display the tuition insurance offer as students and families go through the portal to pay their tuition bills. That capability allows schools to also display their refund policy for students to acknowledge they have read and understand.

Most schools, including Purdue, don't provide refunds for withdrawals beyond the first few weeks of classes. The policies for refunds and withdrawals tend to also be buried on school websites and can be difficult to find. Riley admits he was hesitant at first to display Purdue's refund policy, for fear of getting complaints and questions. He was initially concerned that incoming Purdue students would be put off by seeing the withdrawal and refund policies, but he saw that wasn't the case at all.

"We just started it this summer... it actually has worked out," Riley said. "And it has gone over really well because our students are finally aware of everything. They can't play the role that they didn't understand [the refund policy] because we put it right in front of them and we saw they accepted it."

When Purdue's GradGuard Tuition Protection Program first launched in Dec. 2018, there were not many students who opted in for protection. Integration with the campus' billing provider for Fall 2021 changed all of that. As students and families are in the billing portal, they are presented with the option to purchase tuition insurance without having to leave the page. GradGuard and partnering billing providers have also worked with Purdue to improve visibility and marketing efforts, to in turn see more students participating in the program.

"The more you can have it in front of them, and they can pay then are there and make it easy... I think the better off you'll see it," Riley said.

Before the Fall 2021 term, Purdue's refund policy wasn't displayed on its website. Riley believes utilizing the billing provider's consent manager feature for the refund policy, along with the integrated tuition insurance offer, improved participation rates for the program.

Purdue has seen tremendous growth in students opting in for tuition insurance since the first season with an increase of nearly 52,000%! 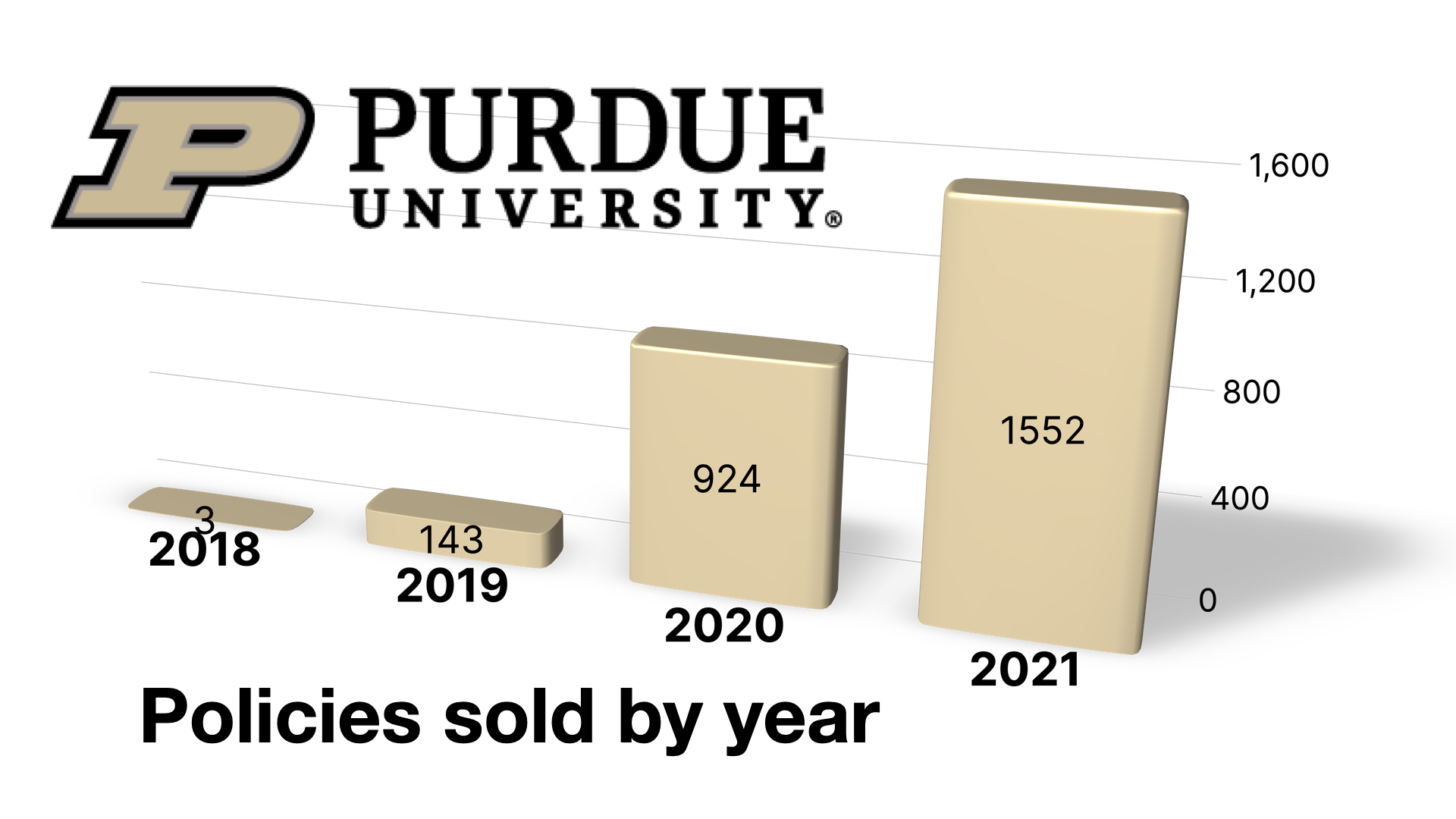 "It was nice to see our numbers where they were," Riley said. "I think that helped, on top of the ability to opt into it very seamlessly through our payment system."

Student Interest in the Program Grows Each Year

While Purdue's tuition hasn't increased in the past 15 years, student interest in tuition protection continues to grow year over year. Health and wellness are on the minds of many, especially during the pandemic.

"Having that peace of mind that if something does happen, they have a financial plan to back them up," Riley said. "I know if I was sending my student out of state, it's something I would probably opt in to just in case. I think it's good to have."

Enrollment and retention are always top of mind for higher ed administrators, especially those in the financial services or business offices. Riley believes partnering with GradGuard enhances Purdue's enrollment numbers, even if they have preexisting conditions.

GradGuard can protect students with preexisting controlled conditions such as anxiety, depression, and other mental health conditions. Tuition insurance makes it easier for students to decide to opt into the program and get protected, Riley says.

It's easy to see how much tuition insurance has grown at Purdue in just the past few years. Similar increases have been seen at other GradGuard partner institutions that have implemented integrated programs.

See if your college or university is eligible for a Renters Protection Program with GradGuard here or by emailing us at CampusInterest@gradguard.com.